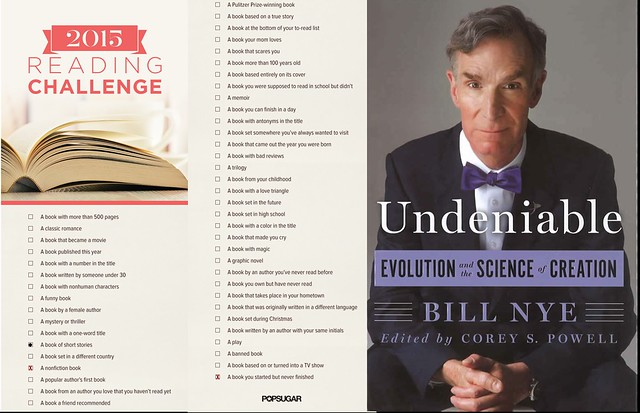 I came across this one while looking for an e-book to put on my iPad so I’d have something to read on those full-to-bursting-backpack days. It completes the item for “a nonfiction book,” and wow…I tore through this book faster than I think I’ve read a nonfiction in a very long time. My favorite part about this one was Bill Nye’s writing style: conversational, informal, strewn with jokes (such as the running gag of his old boss as a lesser-evolved life form), and unquestionably him. Fans of the Bill Nye the Science Guy show from the 90’s (like myself) will be able to hear his voice quite clearly in their heads as they read – it’s like an adult version of his show in book form!

I was also really impressed with the content of the book – I’d expected it to be much more about the debate with Creationist Ken Ham (the impetus for Bill writing this book in the first place). But he actually only touches on the debate in one chapter. He mentions the common Creationist arguments every so often, usually about once per couple of chapters, but the majority of the book is simply a discussion of evolution and all its facets. He discusses ramifications of evolutionary theory that I hadn’t even considered, such as its connections to game theory, the evolutionary push towards altruism, and the question of how evolution can help us determine if there’s life elsewhere in the universe. This book really drives home the point that “evolution” as a theory is about more than just how life began on Earth; it’s a general organizational scheme for how life currently exists and how it might exist in the future.

I’d highly recommend this book to everyone, especially fans of his other work. Even if you’re a believer in Creationism, please give it a try. Go into it with an open mind – I promise Bill stays respectful and practical and it’s really not about bashing worldviews at all!

Up Next, I tackled a book of Short Stories edited by Neil Gaiman!