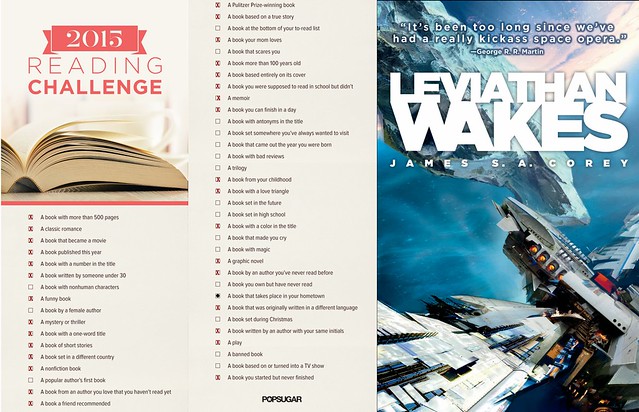 This was another BYOBook. The topic this month is “get a recommendation from someone who lives far away from you,” and the same good friend who recommended Locke Lamora earlier this year promptly responded with this one. He described it as ‘two parts sci-fi, one part detective noir, and one part body horror,’ which turned out to be a pretty accurate description.

The book in general is soft sci-fi set in the asteroid belt of our solar system, but with a gritty detective story woven throughout. The perspective alternates between the ship’s captain and the detective, two characters with opposing ideologies. The captain is idealistic and always trusts that people will do the right thing, while the detective has seen the worst of humanity and tends toward cynicism and nihilism. Their repeated conflicts really hammer home the complexities of life in the solar system.

The space parts reminded me of Larry Niven a bit, and I thoroughly enjoyed the noir elements as well. I loved the little details of how life works out in the Belt; from the cocktail of drugs injected into pilots when attempting to pull more than a few G’s during flight to keep them conscious to the depictions of the shifts in gravity due to spin or thrust. And yes, there was a fair bit of what my friend calls ‘body horror’ and what the author in the interview refers to as ‘squick.’ Maybe not for you if you have a weak stomach, but fortunately it wasn’t too much for me. This is the first book in a series, though, so there’s quite some potential for the squick factor to increase now that the Leviathan has, in fact, woken.

Overall I enjoyed it, and will definitely put the rest of the series on my ‘to-read’ list.