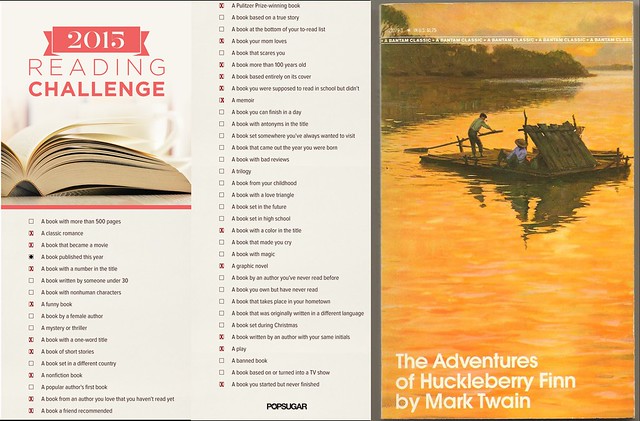 Huck Finn is one of those books where it takes a while to get into the language – it’s written in several southern dialects, and while the narration is relatively easy to puzzle out once you’re in the thick of it, I never managed to get through a speech of Jim’s without having to reread parts of it, sound them out in my head, and figure out exactly what he was trying to say. It definitely does give the novel a particular sound, which is probably what Twain was going for, but I’d almost always rather read something written without a dialect and imagine it myself.

Other than that, I was most struck by the fact that Tom Sawyer is a despicable human being. I always caution my students that you don’t need to like a character in order to understand the reason they’re in the novel; and boy, did I have to remind myself of that with Tom! Of course, the main theme of the novel is the way nobody treats the slaves as people and doesn’t think about them the same way they think about their friends and family. And Tom is complicit in all of that. It frustrated me that Huck didn’t seem to be upset enough about the things Tom did to call him on it, and still seemed willing to follow Tom’s lead even at the end of the novel. After the moral journey of the first half of the novel, it just seemed too much like a reset and I would have liked to see Huck break ways with Tom, now that his own views are not compatible with Tom’s anymore.