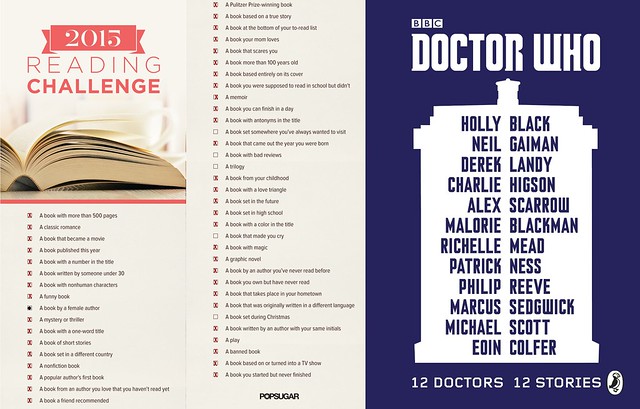 “12 Doctors, 12 Stories” is a collection originally published as a series of ebooks, containing one story for each of the Doctor’s twelve regenerations, each written by a different contemporary author. I definitely enjoyed them, though I was expecting a little more variation in the portrayals of the different Doctors. Aside from describing their physical appearance and clothing, most of the Doctors sounded very similar in writing, which surprised me since the episodes I’ve seen have had very different-seeming Doctors depending on who’s playing him. I wonder how much of the distinct personalities and portrayals present in the show actually come from the actors themselves and the spins they bring to the writing.

As for the stories, I thought most of them seemed like one episode of the show – perhaps a smaller bite than a usual episode in some cases, but the same sort of ‘adventure of the week’ style. All were fairly light-hearted, and some even reminded me more of other sci-fi styles, like a grand classic hard sci-fi style for the 12th doctor, or a campy fun episode of Star Trek TOS for the tenth doctor. All in all a fun read, especially if you happen to like Doctor Who.