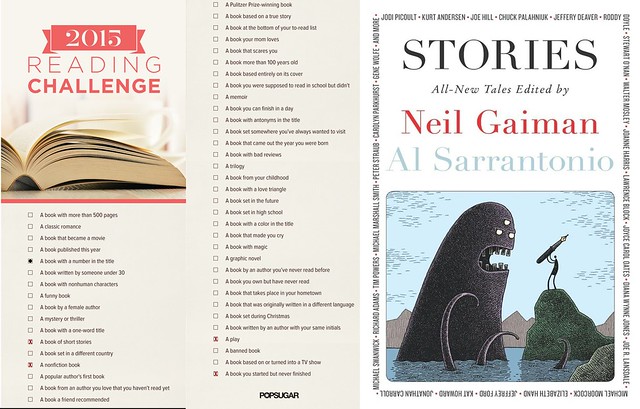 I checked off “A book of short stories” and read this anthology edited by Neil Gaiman and Al Sarrantonio.

Gaiman begins the book with an introduction discussing how they collected the stories for this volume. He talks about the idea of four words that indicate a great story: “And then what happened?” This collection is stories that made him and Sarrantonio want to keep turning pages to see what happened next. I definitely see that common thread throughout the anthology. I also enjoyed the fact that each story was from a different author, and that most of the authors were ones I’d never read before. I’ll almost certainly look up more of their work now that I’ve gotten a taste of what they can do.

The stories are all over the place in terms of setting, plot, characters, and writing style, though all have at least a little bit of that Gaiman-esque supernatural about them. I found that most were of a genre I would probably call “magical realism,” where the story is ostensibly set in the real world, but one or two things about it are just a hair bit supernatural and leave the reader with an uneasy feeling that they don’t quite know all the rules of this world.

Here are just a few of my favorite stories:

“Wildfire in Manhattan,” by Joanne Harris – an aspect of the fire god lives in Manhattan, sees his brother aspect get killed and gets roped into a plot to save a sun aspect from the killers.

“Weights and Measures,” by Jodi Picoult – the death of their daughter weighs heavily on two parents, as one begins to waste away and the other grows larger than life in her absence.

“Parallel Lines,” by Tim Powers – twins are separated by the death of one, but not for long.

“Loser,” by Chuck Palahniuk – an intriguing tale told in second-person about that time you took acid and went on The Price Is Right.

Overall, I highly recommend this anthology. I did take a bit longer than I expected to finish it, because I was left with the sense that each story should be savored, enjoyed, and left to percolate in my brain just a bit before beginning the next one. If you like short stories and the unknown, pick this one up and enjoy it with a cup of coffee for the next week or so.

Up next, I tackle a book I’ve been meaning to read for a long time but never got around to…with a number in the title…