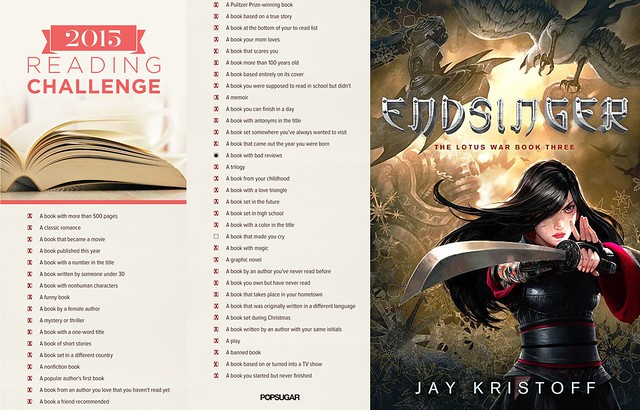 I absolutely loved this series; it’s one of the highlights of the year for me. Stormdancer was the very first book I read for the challenge, and I read Kinslayer midway through the year for a different line item. This installment wraps up the series nicely – I’m very glad that the story actually ends, unlike a lot of fantasy series that just keep going as long as they can. The Lotus War is definitely a tale for the ages, epic and imaginative as ever.

This one was brutal – nearly everyone we’ve grown to love over the previous books meets a ghastly end as the world is literally about to come to an end and their country is too busy fighting a civil war to notice until it’s almost too late. I teared up at several points as various story threads were resolved, and if it sounds like I’m being cryptic, it’s because I don’t want to spoil anything, since you should all be putting on coats to go to the local bookstore and pick up Stormdancer by now!