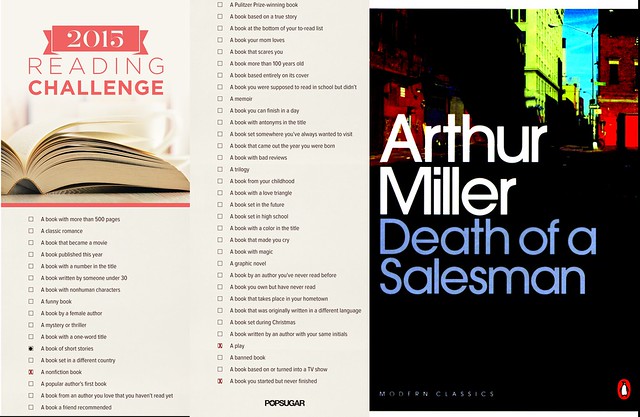 I threw this little beauty in my backpack for yesterday’s long day out teaching lessons. I’ve had Arthur Miller’s “Death of a Salesman” on my shelf for a while, but I’d never actually read it cover to cover. I love reading plays, so if I can swing it there might be a few more of them in this year’s challenge, but this one fulfills the “play” requirement.

I was fascinated by a couple of things while reading. The first was the subtle way that Willy Loman’s mental state is depicted through intercutting of scenes. Willy is losing his mind due to stress, and struck me as perhaps having some kind of dementia. He lives in the past, drifting off into memories of happier times when things aren’t going his way in the present. Several times in the play, there are two completely different conversations going on, one in the present where Willy is physically seated, and the other in the past where he is actually participating. People in the present scene are constantly confused by his responses and outbursts, because he’s in a different world than they are. It’s amazing to read, and I can’t even imagine how cool it must be to see it play out live.

The other intriguing thing for me was the stage directions. I’m used to stage directions being primarily the actions of the cast – when people exit and enter and from where, their basic blocking, etc. In this play, though, the stage directions seem much closer to being a straight-up narration in spots. Miller describes the characters’ thoughts, feelings, and emotional states in much more detail than the average play script, and even describes the scenery and lighting in vivid detail. It’s almost as if he’s transcribing one particular production of his play, right down to the color of the lighting and the exact look of the sets.

Stay tuned for my review of a book of short stories!