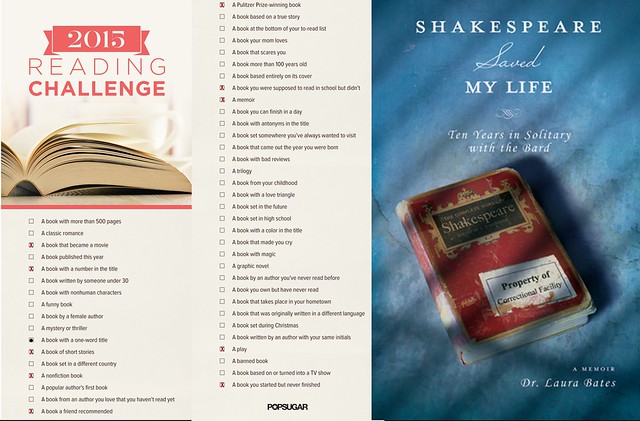 We interrupt your regularly-scheduled Reading Challenge with a newly-finished book not originally on the agenda! Poking around my library’s eBook site as I usually do when looking for a new book, I was intrigued by this book on the front page, part of a new project called the “Big Library Read”. Apparently the Big Library Read is a thing where libraries around the country all put this same title on their eBook centers, with no wait list or holds necessary, for about 10 days. People all over the country read the book and participate in an online discussion group, answering questions provided by the publisher. I decided to give it a read, so it’ll be checking off the line item for “a memoir.”

Shakespeare Saved My Life is the story of a middle-aged Shakespeare professor in Indiana who begins an Intro to Shakespeare class at a maximum-security prison nearby, specifically starting her program in what they call “Supermax” – the solitary confinement unit filled with the supposedly “most dangerous” of the hardened criminals. She meets one particular inmate who really takes to the work, and her memoir chronicles his mental transition through studying the bard, and how he influenced her own understanding of the work.

I was struck by the contrast between the way the inmates are treated (horrifically, as rabid animals) and the side of them she got to see through working with Shakespeare (intellectual, compassionate, capable of empathizing with their victims and their fellow inmates). Projects such as the collaboration with a neighboring facility housing women who have been victims of domestic abuse, where the women and the abusers in Bates’s prison communicated back and forth through letters in order to come to an understanding of each others’ mindsets, shone a light on the potential for growth and rehabilitation that would be present, if only the system would permit it.

At the same time, without Bates ever outright stating it, I got the distinct sense that the solitary confinement system used on these prisoners was truly inappropriate – and pretty darn inhumane. Not in the way I would have originally thought it – beatings, verbal abuse, etc. – but in the sensory deprivation itself. The conscious, reasoned thought that was obviously put into their living arrangements very nearly made my stomach turn – no human being deserves to be purposefully incarcerated in such a way that they never see another human face and are intentionally fed bland grey mush for food – “Forget about spices; any identifiable flavors are prohibited.” (Chapter 29) I guess I’d always assumed that if conditions were bad, it was due to lack of funding or some such restriction; this memoir paints a picture of conscious, deliberate dehumanization.

I highly recommend this book despite its somber subject matter – it’ll certainly make you think, and thanks to the Big Library Read, there’ll be someone to chat with about its big questions when you’re done!

Up Next: I’m still working on the Book with a One-Word Title!