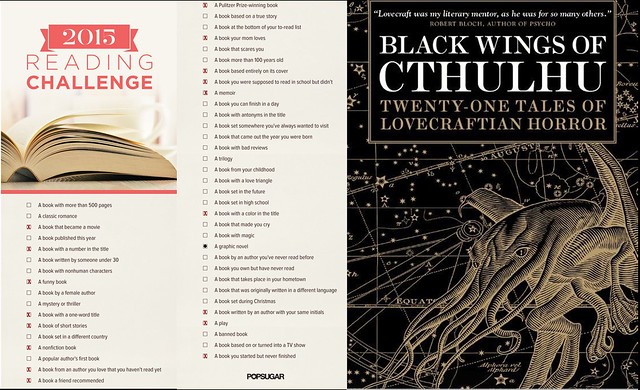 “Black Wings of Cthulhu” is a collection of ‘Lovecraftian’ short stories. In the introduction, S. T. Joshi explains that the stories do not necessarily have to make use of Lovecraft’s mythos in order to be considered in his style, and many of his themes run through the stories, even when they do not specifically feature Great Old Ones or nameless horrors. Most of them do to some extent, though, but often in a much more tangential way than I expected.

I was struck by the specificity of the themes that ran throughout many of the stories; things I wouldn’t normally have connected with Lovecraft. There was quite a bit of discussion of dreams and dreaming, and of characters unsure if they were dreaming or waking. There was talk of ancient oceans where now there are deserts, and of unspeakable, unnameable horrors driving people insane. There were quite a few stories making use of the artist Pickman in various ways, and several in which Lovecraft himself made an appearance. Of course, there were tentacles. There were symbolic uses of green, violet, gold, and orange, and eyeballs figured prominently in many stories. Oh, and there’s a guy who robs a liquor store at 2 am wearing a T-shirt that says “Cthulhu Rules”.

I was impressed by how well the collection hung together; despite each story being authored by a different person, they all shared similar tones and narrative styles (no doubt influenced by Lovecraft).

I highly recommend this one – it wasn’t overtly scary for the most part, though if you’re prone to nightmares you may want to only read it in brightly lit rooms.