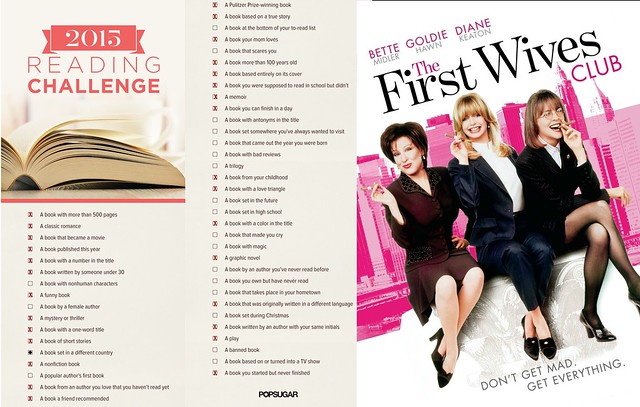 This month’s BYOBook Club theme is “Revenge,” and while sifting through the pages and pages of trashy romance novels looking for something entertaining to read, I found this one. I absolutely love the movie of The First Wives Club, but I never knew it was based on a book! I also wouldn’t have expected the book to be as hefty as it is – mine clocked in at 557 pages. What I ended up with was a fun, easy read with lots of interesting differences from the movie.

The most surprising differences, for me, were in the introduction of quite a few supporting characters that weren’t in the movie. In particular, each of the three main characters finds someone they become attracted to in their journey to get revenge on their ex-husbands – and one of them is even a same-sex relationship! I was pleased to see the same-sex relationship handled tactfully and non-exploitatively, and to see the other characters in the novel react to it with love and support.

There were also a few distinctive set-pieces in the movie that turned out to not be in the book, including the classic scene during their sleepover where they burst into a dance number from their college time (and the reprise at the end of the movie). I was disappointed to not get to read those moments. The girls also don’t have the matching pearl necklaces from the movie, and only Annie receives their friend’s fateful letter at the beginning. It really did seem like Annie was slightly more prominent in the book than the other two, though the POV does shift around a lot so we get to experience them all roughly equally. But it seems like Annie’s transformation is the most important part.

All in all, a fabulous and fun read – and I’ll admit, I was hearing Bette Midler, Goldie Hawn, and Diane Keaton in my head the whole time – they were perfectly cast for this story.