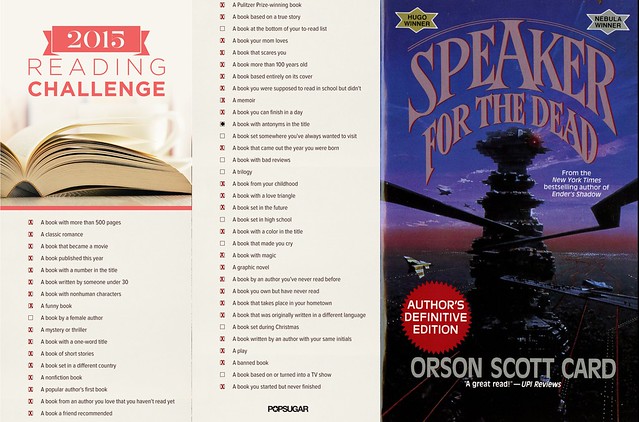 I read Ender’s Game in high school, but hadn’t read any of the later works in the series because I’d heard they weren’t very good. Picking up this one in the store and reading the introduction, it appears that Card actually wanted to write this story and realized halfway through that he needed to expand his (at that time) novella about Ender into a full novel in order to explain the intervening time between that story and this one. He described Speaker as a stand-alone novel, or one that was always supposed to be able to stand alone, so I figured it’d be worth a read.

And I actually quite enjoyed it. It’s technically not as tight as Ender’s Game; some of the narrations are a little bit redundant (a favorite description is to say that a character ‘said silently’ something they were actually just thinking), but the story itself is definitely well-crafted. Be warned, though, if you liked Ender’s Game – this is a completely different kind of sci-fi story. Where Ender’s Game was a combination of boarding school and action, Speaker is more philosophical and centers around the attempts to initiate peaceful contact with a new alien race.

A very clear theme running through the novel is the idea of hard truth – someone calls a Speaker for the Dead not because they want to hear platitudes about the deceased, but because they want to hear the truth, no matter how hard to bear it might be. At the same time, the attempts to interact with the aliens are stifled by the fact that the xenologers are forbidden from telling them anything about their own civilization – the truth must be kept hidden from them at all times. The Speaker arrives and throws the whole colony into chaos due to his unwillingness to soften the truth, but in the process mysteries are solved, relationships are healed, and Ender Wiggin gets closure for the horrific truth of his own past.

I thoroughly enjoyed this book, so if you like deep reading and don’t mind the creative depiction of religion, specifically Catholicism, in a sci-fi context, give it a try.