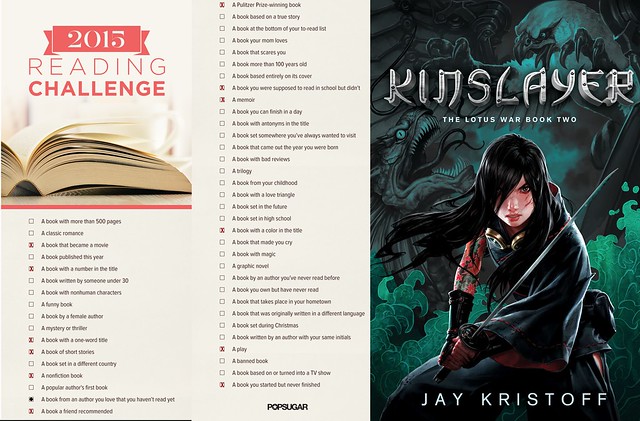 “Kinslayer,” by Jay Kristoff, is the second book in the Lotus War series. Kristoff’s fascinating dystopian steampunk Japanese world is as striking as ever, and only gets more and more intriguing as more is revealed. There are some significant changes in the storytelling format of this book that kept me thoroughly engrossed right up to the end. Whereas the first book, “Stormdancer,” followed Yukiko almost exclusively, this book tells the story of the chaos following the events of the first book from multiple people’s perspectives, effectively telling somewhere between four and six stories at once (depending on how you define the stories). The narrative shifts back and forth between the main characters, telling one or two chapters from each at a time, and quickly traveling back to cover the rest of the characters’ actions during that time. Several of the newly-introduced characters get flashbacks as well, vignettes told in italics that show us glimpses into their histories and motivations. The whole thing culminates in a climactic ending scene where all these disparate stories are woven together in a desperate battle that begins the ‘Lotus War’ proper.

Friendships are forged, betrayed, broken, and tested in this book. Traitors abound, and Kristoff pulled several gut-punch plot twists out of his hat with a flourish near the end in a way that caused me to look up from the book, stunned, in several places. I am certainly primed for the final installment!

Also: creepy zombie cultists who flay off their own skin and tattoo ancient texts on it. That is all.