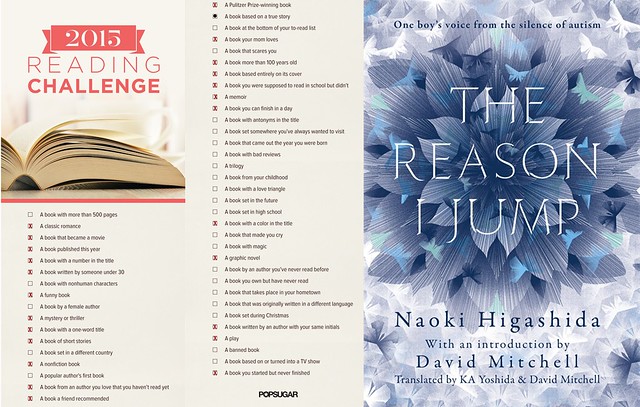 ‘The Reason I Jump’ is a book written by a 13-year-old Japanese kid with autism about what it’s like to have autism. Naoki’s disability makes it nearly impossible for him to communicate verbally, but he and his parents found that he could communicate in writing, by pointing to letters on an alphabet grid to transcribe the words he wants to say. In this undoubtedly painstaking manner, he wrote this little book, answering questions most frequently asked by caregivers about how to interact with an autistic person.

I found his insights really beautiful, and surprisingly mature for such a young teen. In general, he makes the case that most of what upsets autistic people is actually the embarrassment or fear about being a bother to other people. Not being able to communicate doesn’t mean they don’t understand what you’re saying; they do, they just can’t answer you promptly the way they’re quote-unquote “supposed to,” and that worries and stresses them out. He philosophizes a bit on why autism might exist, highlighting autistic people’s love of nature as a potential reason – that maybe they’re just a different kind of person, one who’s more suited to living with nature than living in the modern world.

This is a quick little read, and it was on my library’s eBook site for free, so I highly suggest you seek it out. It’s an intriguing look at the inner workings of the mind.