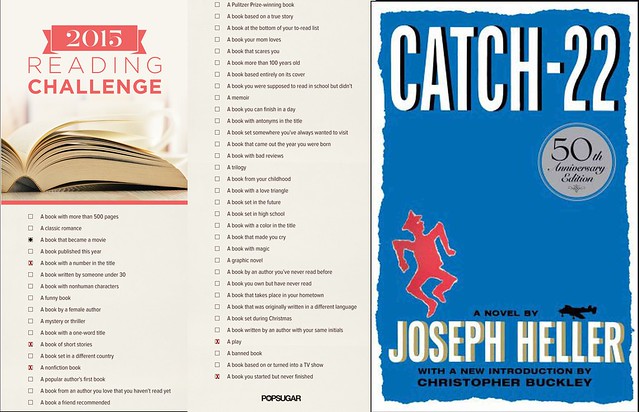 This one was to tackle “A book with a number in the title”. Of course, I could not pass up a chance to finally read a book that I’ve been wanting to read for years now – “Catch 22”!

The title has since become synonymous with the idea of a self-contradicting statement, a predicament you can’t get out of because of its self-referential nature. Catch 22 follows the experiences of a bomber pilot in WWII whose superior officer keeps raising the number of missions required to complete a tour so that nobody can go home. The protagonist’s efforts to worm his way out of flying missions repeatedly bump up against the impassable wall of ‘Catch-22’ – crazy people aren’t permitted to fly missions, but you’d have to be crazy to fly them in the first place, so if you try to have yourself declared insane to get out of flying more missions, you’ve just proved you’re sane and are immediately sent back up in the air.

What surprised me most about this book was the consistency and density of its contradictions. Going into the book I was expecting it to be about that self-contradictory paradox – but nearly every sentence contains a contradiction! Descriptions are always couched in mutual exclusives, such as saying a character loves a girl because he hates her, or describing one of the colonels as brave and insecure. It gives the surprising effect of showcasing just how little rational sense the world these pilots live in makes, while simultaneously giving a perfectly clear impression of the story and characters.

This book is by its very nature pretty difficult for me to describe, but I definitely enjoyed the experience of reading it. Anyone with a military background would find it especially entertaining, as would anyone who enjoys logical puzzles or quirky tongue-in-cheek humor.

Up Next: “A book that became a movie.” Hm…wonder what it was…