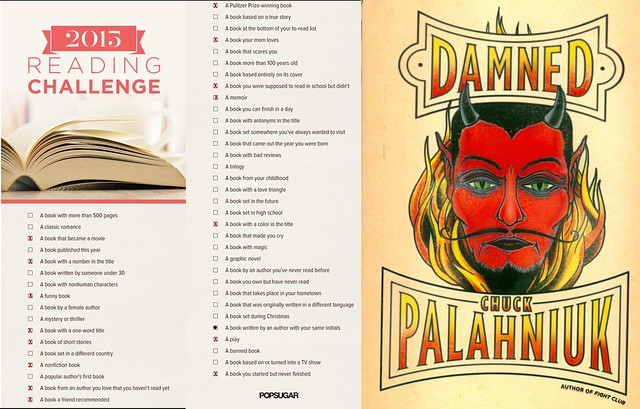 “Damned” tells the story of thirteen-year-old Madison Spencer, who dies tragically and is sent to Hell. That’s where the book starts, with her already dead. She goes on to have adventures with a group of misfit damned souls reminiscent of The Breakfast Club – and to be honest, that’s all I really want to say about the plot. It just gets better and better as the book goes on, and I really don’t want to spoil anything since my descriptions wouldn’t hold a candle to the ones in the book. Just read it for yourself – it’s short and easy to digest. And yes, it’s very funny, in a slightly deranged sort of way.

I did enjoy how each of the short chapters begins with a miniature ‘diary entry,’ beginning with some variation on the phrase “Are you there, Satan? It’s me, Madison.” And once again I find Palahniuk’s use of second person intriguing. (If you remember, I was first introduced to Palahniuk’s work through a short story in the anthology I read a few months ago that was told entirely in second person.) The book is told from Maddy’s perspective, but she’s very much telling it directly to Satan, so she refers to him as “you” for most of the book.

It strikes me as particularly comic that I read this one immediately following Lamb – from one side of religious lore to the other, eh?