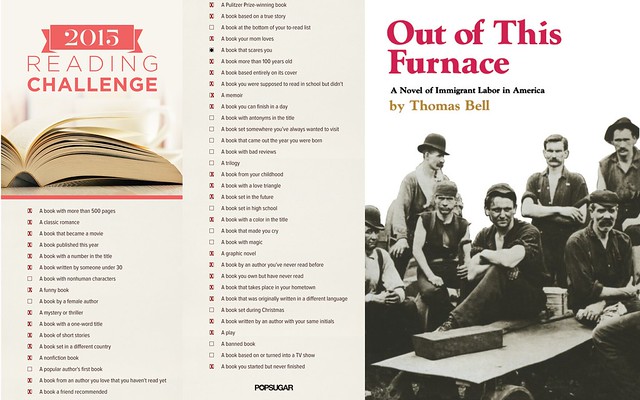 I thoroughly enjoyed this novel about Slovak immigrants in the heyday of the steel mills in Braddock. I was surprised at how easily Bell managed to convey the immigrants’ accents without actually writing in dialect – it reminded me a bit of Hercule Poirot sounding quintessentially French because of his word choice. Finding out from the afterword that this book is sort of a fictionalized autobiography makes a great deal of sense; Bell probably heard his parents and grandparents in his head while writing these characters.

In general, I think this book would make a good counterpoint to a novel like Ragtime or The Great Gatsby. It deals with similar themes of ‘The American Dream’ and what that means to the people living in the early 1900s, but Out of This Furnace shows a particular kind of American Dream in a very particular way. Ragtime touches on the mills and the immigrant life with Tateh and the little girl’s story, but Out of This Furnace digs in to talk about everything, good and bad, associated with being an immigrant in that era.

The book spans three generations of immigrants, with the main character of part 1 slowly becoming the ‘crotchety-grandpa’ character in part 4. I found Kracha’s transition to be fascinating – when the narrator for part 4 accuses him of being an old-timer, and yet, we as the reader can REMEMBER being inside Kracha’s head earlier in the story, it gives an even more pointed nod to how much the country and its people changed over even such a short time span.

If you’re a fan of family stories, the American Dream, or books set in Pittsburgh, I highly recommend this one.