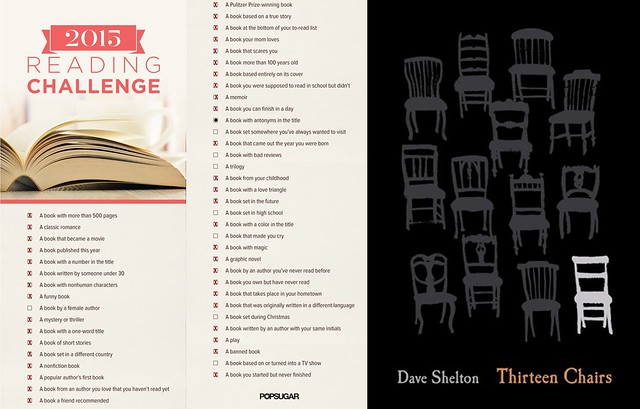 I wasn’t originally going to count this one, since I picked it up for ‘a book that scares you’ and then ended up reading Thief of Always instead. But then I realized that one of my remaining items is ‘a book at the bottom of your to-read list,’ and since I don’t really have a to-read list but was planning on keeping this one around for next year’s challenge, I’d just consider it dropped to the bottom of the list and recovered for this entry. This is “Thirteen Chairs,” by Dave Shelton.

So this is a little gem of a book, a quick read (I think it’s meant for middle-grade readers) that definitely taps your spooky nerves. Read it in honor of Halloween this month! Basically, the plot of Thirteen Chairs is that a young boy goes into a vacant old house and finds a room with twelve mysterious storytellers seated around a table…and one chair left for him. He sits down, and the storytellers each tell a ghost story in turn.

I loved the creativity of both the stories and the tellers; each teller had their own distinct personality. From the enigmatically calm center figure, to Piotr, the hulking Russian man, to Frances Crane, the cheerfully talkative woman with the scars on her forearms. Not only were they each distinct, but their characters were carried through their stories as well. Piotr’s story is narrated in broken English, the kind of syntax someone with Russian as their native language might use. The others each brought their own narrative styles to their stories in turn, so you were always clear on exactly who was telling the story. And the stories themselves were quite creepy; getting progressively darker as they went on.

I definitely recommend this one if you like ghost stories, or spooky scenarios, or even just want to celebrate the newly-fallish weather by indulging in some old-fashioned Halloween fun.