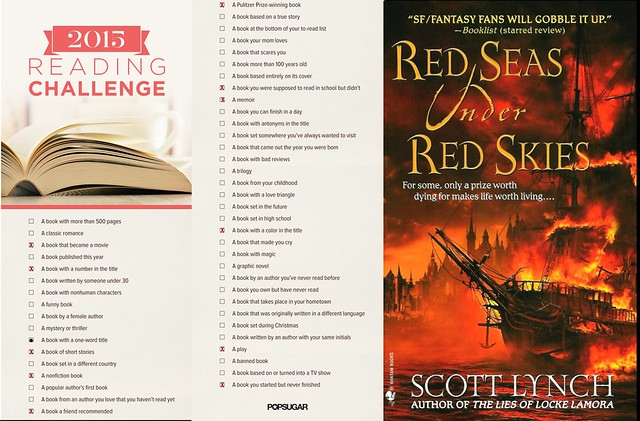 Wow – Locke Lamora is at it again! Consider me officially hooked on this series now – yet another winner of a fantasy-action-con novel from Scott Lynch. In this one, Locke gets roped into being a real-life pirate – not by choice, unfortunately. Some great characterization and world-building ensues, with badass female pirates running a tight ship and standing toe-to-toe against much greater foes. Reading as Locke and Jean went full pirate-cliche for a con was incredibly entertaining, particularly since it’s contrasted with the nowhere-near-cliche depictions of the actual pirates they’re working with. I also really enjoyed getting to see more of the mysterious world where they live, with exotic ports of call and frightening sea monsters.

Oh, and those mages Locke pissed off in the first one? Yeah, they’re still pissed off – possessing shopkeepers and little children to do the creepy horror-movie prophecy bit and let our heroes know they’re still being watched. Over and over, Locke displays his uncanny knack for getting in over his head and forced to undergo greater and greater cons, and once again manages to complete them all fairly decently without dropping any of his story threads.

I almost switched the line item for this one to “a book that made you cry,” since I was bawling for several pages near the end, but I just couldn’t pass up the colors in the title. Rest assured, though, that the next book in the series will make every effort to jump into my challenge list somehow!