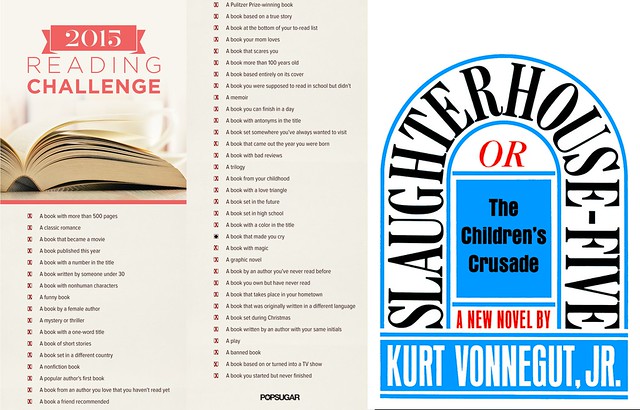 For this one, I needed ‘a book with bad reviews’. But I didn’t want to just pick a bad book, since I have trouble getting through books that I’m not enjoying. I decided to look for a book that is now considered a classic but was panned when it came out. And I found one – ‘Slaughterhouse-Five’!

I can totally see why this one would have gotten bad reviews – it struck me as more of an art piece than a traditional novel. The theme of time travel and seeing a story as a collection of vignettes that give insight into a particular character made for a book that jumps around in time constantly and on the surface seems scattered and plotless. But I quickly realized that that’s the point of the novel; it’s a novel in the Tralfamadorian sense, and you’re supposed to see all of it at once rather than reading it in a linear fashion. I really enjoyed this one; just don’t try too hard to pin down a plot. It’s more of a character study for Billy Pilgrim, revealed through the sort of word-association game his brain is playing with him as he comes unstuck in time. The continued repetition of the phrase “So it goes” whenever someone or something dies really helped to communicate the desperation of Billy’s psyche trying to make sense of the atrocities he saw in the war. It’s hard to explain fully what makes this book work, but it’s a relatively easy read, so just give it a try yourself!