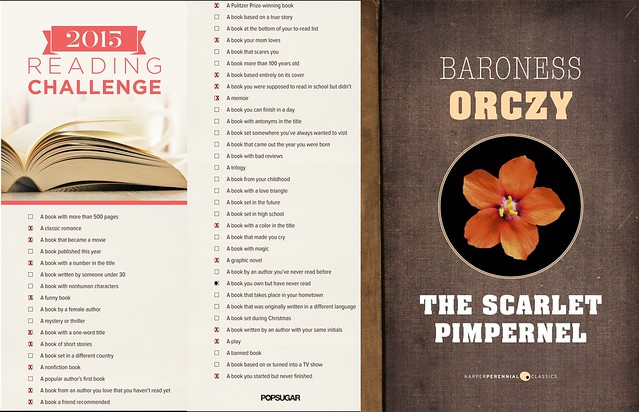 I’ve never been a huge fan of the big names of classic romance, like Jane Austen. But when I skimmed through a list of classic romance novels and came across this one by the Baroness Orczy, I knew it was a perfect choice. I remember seeing a play adaptation of The Scarlet Pimpernel at the Stratford Festival in high school and thoroughly enjoying it, and I definitely enjoyed the book as well. It’s got lots of action, daring intrigue, clever disguises, and a strong female lead who goes to great lengths to save the man she loves from a predicament she herself got him into. It’s definitely got elements of classic romance in it, without being too dry or languid.

One thing that did strike me about the particular version I read (I got my copy from iBooks for free) was that the story, taking place as it does during the French Revolution, is peppered with French words, and in my eBook version those French words are written in all caps. It was a bit distracting and seemed random for a while until I realized that it was only when the narrative used a French term as a sort of slang for something, and I suspect it might have had to do with the eBook program’s inability to handle accents or something like that.

I got used to it after a while, but I wonder if it might have bothered me more if I weren’t mostly-fluent in French already. I didn’t really need the parenthetical explanations generally given for those French words, but someone who does not speak the language might have found it more confusing, and writing them in all caps does tend to make the reader think they should be paying more attention to those words than others. In a story involving secret plots and political intrigue, it sometimes obscured the actual point of the narrative by drawing my attention to irrelevant details.

Overall, I enjoyed this one immensely and highly recommend it, especially if you’re a French Revolution fan or enjoy tales of daring con men who are masters of disguise.