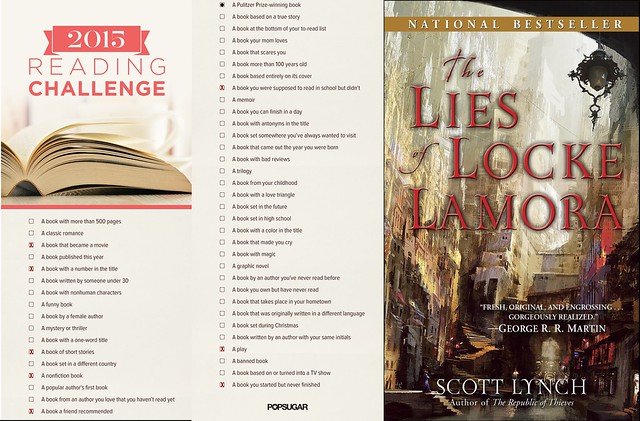 My friend Nathan Bohn suggested I read this one for my BYOBook club this month, so it’s filling the line item for “a book a friend recommended”.

Wow. This has got to be one of the best books I’ve read so far, and I’ve enjoyed every book so far, so that’s a huge compliment. Our topic for BYOBook club this month is “Conspirators, back-stabbers, and otherwise untrustworthy characters,” so Nathan suggested I read “The Lies of Locke Lamora.” This amazingly fun read concerns Locke Lamora, plague orphan, who is sold to a priest of the god of thieves and taught to be a con man. The book concerns Locke and his fellow “Gentlemen Bastards” in their attempt to pull off the con of their lives.

I was intrigued by the structure of the book quite a bit. Every few chapters throughout the novel, the narrative is interrupted by an “Interlude,” which tells a short story about an event from someone in the group’s training, usually tangentially related in the sense that the information in the interlude explains why so-and-so knows how to do such-and-such. It gives the book as a whole the effect of telling two separate stories at the same time, one concerning teenage Locke learning to be a con man, and one concerning 30-year old Locke pulling off the big con.

I also love this idea of the “Lies” of Locke; at many points throughout the book Locke is forced into bigger and harder cons, with the reader constantly wondering how he’s going to pull this one off. Highlights for me were Locke finding out that he has to be not just two people at the same time, but two people IN THE SAME PLACE at the same time, and Locke having to con someone into giving up their clothing to him in the next hour or the whole con is blown. The narrative is riveting and entertaining, and I genuinely felt for every single character.

I checked when I finished the book, and this is just the first in a long series – yet another amazing book series to add to my to-read list!

Up Next: For something presumably a bit darker, I read a Pulitzer-Prize winning book!